The creator of Liuhebafa was the Taoist philosopher and mathematician Chen Hsi I (also known as Chen Po and Chen Tuan), who lived from approximately 871-989 A.D. From his remote hermitage on Mount Hwa in north-central China, he developed the principles and practice of Liuhebafa (although the Taoist concepts and symbolic language of internal alchemy are much older). According to lore, Chen Hsi I hauled himself and all of his manuscripts into a burial cave on Mount Hwa and expired at the ripe old age of 118 years.

Three hundred years later, Li Dongfeng, a scholar and martial artist, went in search of the old master’s final resting place. He was guided to the cave’s entrance one night by an inexplicable glow that proved to be the “enlightened” remains of the sage himself (as legend would have it). In the years that followed, Li devoted himself to Chen Hsi I’s manuscripts, becoming adept at Liuhebafa, and teaching the form to a small inner circle of Taoists. All Liuhebafa taught today can be traced back to this handful of Li’s students.

The literal translation of “Liuhebafa” is “six combinations, eight methods.” And the main form consists of a sequence of 66 movements. To the uninitiated, the sequence would probably look like a complicated and twisty form of Tai Chi. But, as with all the Taoist arts (which include the more familiar internal martial arts of Tai Chi, Bagua and Hsing I), the stylized form of Liuhebafa is simply a means to an end. And the end being sought, at the most esoteric level, is “internal alchemy” – a bodily transformation that will theoretically lead to immortality.

True internal alchemy involves energetic transformations within the body, resulting from physical and mental cultivation achieved through the practice of Liuhebafa and other Taoist arts. According to Taoist theory, these transformations will ultimately lead to a purification and re-unification of one’s inner energies (basically, a consolidation of all the yin/yang divisions of the self), thus restoring one to one’s original state and preparing one for re-unification with the macrocosm.

The language of all the Taoist internal arts is bursting with metaphysical symbolism. And none more so than Liuhebafa. Its ancient encrypted lexicon of wild geese and tigers, sun and cloud, mythical creatures and humble ploughboys, is the very essence of poetry – pure metaphor, to safeguard the secrets of internal alchemy and immortality.

The embedded meanings of the names of the 66 movements of Liuhebafa are a road map. And when translated onto the physical terrain of the body, this Liuhebafa journey begins to unfold at several levels. On the surface, we are learning a martial art (and indeed each of the 66 moves has multiple devastating martial applications). At a less visible level, we are using a prescribed sequence of external movements to physically manipulate the internal body for improved health, blood flow, organ massage, energy circulation, and musculoskeletal alignment. At a third level, the lessons encoded in the ancient names become a blueprint for living a life. And at the most esoteric level, the entire package of physical movement plus symbolic meaning is a formula for internal alchemy and personal transformation.

My greatest thanks must go to my friend and teacher Joshua Crossley. In the spring of 1998, he began to teach me and his other Tai Chi apprentice the 66-move sequence of the Liuhebafa main form. Due to various circumstances, he could not teach us openly, nor could we practice the form openly. But we wanted to learn. And Josh, who knew the form 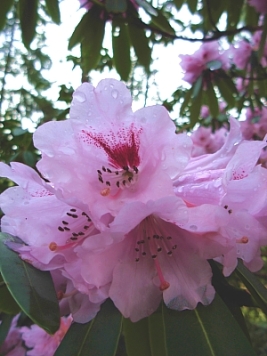 and the underlying principles, was generous enough to want to help. So our tutelage occurred in an unnamed and little-used playground (scarcely more than a scrap of pavement) hidden on a cul-de-sac in a quiet residential neighbourhood lined with mature rhododendrons, cedar, and pine. The three of us would visit our “secret park” daily for the transmission of ancient knowledge (no doubt to the bewilderment of adjacent homeowners). And the clandestine nature of our practice further inflated the mystique of a form already steeped in age-old mystery.

Now it appears to be my turn to pass along some of what I have discovered and synthesized over the past 18 years.

For more information about Liuhebafa, you can read my article in the Journal of Martial Arts & Healing.

Or visit my Links page for some information from external websites.

May you be morning sunshine filling ears